A quick look at what my desktop setup is like.

What hardware im using, what software im running and a few images.

I have been running Linux on my desktop since 1998.

It all started with me begging my mom to drive me to a larger town close to where I grew up.

It took days! But she finally gave in and drove me to the larger city where at the train station there where this kiosk selling magazines that never was where i grew up.

Why you may ask? Well I read somewhere that this issue of the magazine came with Linux on a few CDs including software etc. This Linux was Red Hat 5.2.

At the time internet was a thing on the library and there was no way in hell I would be allowed to download an ISO and burning it to a CD there.
(I had a small fallout with the dude managing the computers there, lets just say i learned to write Pascal code, and sort of ended up using it to be an idiot).

Anyways… This was my start of running Linux.

In a short time (Around a year) Red Hat 6.0 was released and was a HUGE upgrade in UX for a total noob trying to learn, break stuff, re-install and start over.

Ever since ive been using multiple Linux distro’s (Debian, Ubuntu, Manjaro and now Arch Linux) but is ended up using Arch Linux on my machines (Desktop and Laptops).

There are another full story about what I do on the server side, but that will be for a different day.

Currently (And for like 8 years?) I use a pretty minimal window manager called i3wm. 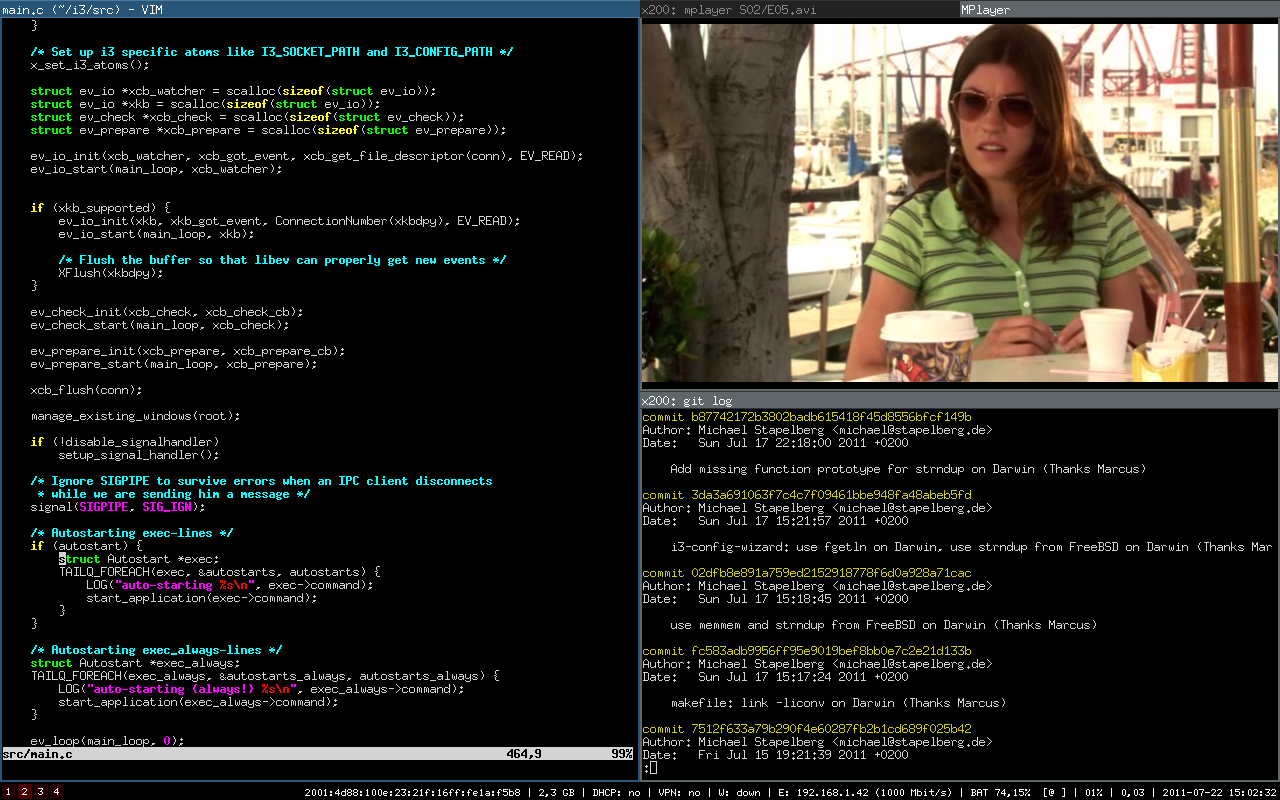 A sample screenshot (From the i3wm website). I’ll take a nice screenshot of my setup and replace it soon (TM).

i3 is a tiling window manager, completely written from scratch.

The target platforms are GNU/Linux and BSD operating systems, our code is Free and Open Source Software (FOSS) under the BSD license.

i3 is primarily targeted at advanced users and developers.

I use a fork’ed version called i3 gaps.

This mainly adds spacing around windows which is purely for looks.

I clearly have been using a lot of different window managers / desktops on the Linux platform, some day I might take you on a trip down memory lane about even having a working GUI on Linux.

My browser of choice is Brave.

Its an open source fork of chrome with a lot of features build in like:

I mainly use two editors depending on the task.

When I need to edit a config file in the terminal i use vim (Yes, I have used it for development as well). Over the years ive build quite a great .vimrc setup and some extensions that I always installs.

When doing any development (Mainly web stuff) I use Visual Studio Code.

Its grown crazy quick to have loads of great extensions and you can sort of build your own IDE or keep it simple.

I will soon update here with info and images of the eye-candy.

Mozilla’s desktop email-client. Great for multiple accounts and have a lots of features build in.

Claw is another email-client i use quite often. This is my “mail-list client” that i use to subscribe to various mailing lists.

Also this is where i send / read encrypted emails.